In this chapter, we are going to look at a precedent transaction approach of valuation and understand how the target company got its number and verify it by comparing its ratio multiples with similar transactions and industry median multiples. 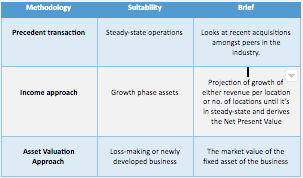 The deal will give Informa a greater scale and specialization in events, the fastest growing part of its business. 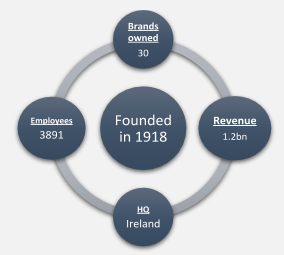 The commercial rationale behind the deal was believed that the enlarged group will benefit from the trend towards increased operating scale and industry specialization in the global information services market.

According to their official deal announcement, they agreed to buy UBM for a 30% premium of their Jan 2018 closing share price. 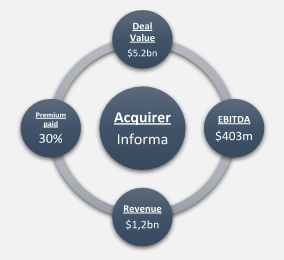 Using the precedent transaction methodology, we compare UBM’s performance to some of its peers by assessing their multiples and industry trends.

Looking at the industry history as well as the top 5 transaction comps, we can see that the double digit EV/EBITDA multiples across the industry are the norm. 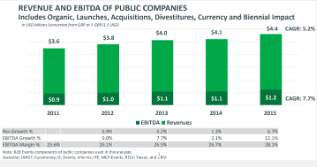 The correlation between the EBITDA margin and EV/Revenue is to be noted as higher margin translates to a higher EV/Revenue multiple. High EBITDA margin shows us that the business has been efficient with its operating expenses.

Looking at a similar deal materialized where one of its peers, Cvent for $1.65bn in 2016, which represented 10x their EV/EBITDA and 69% premium we can determine that the deal was struck at the said premium considering the higher EBITDA margin of the company.

Assuming 13x EBITDA multiple, we achieve UBM’s price tag of $5.2 bn. Lower premium than its peers (30%) can be linked to their EBITDA margin of 31%, which is also lower than its peers that were acquired.

Another way of verifying the valuation is by simply taking the share price paid by the acquirer and multiplying it by the total common stock issued by the enlarged entity, which also brings us closer to our valuation of $5.2bn.

Would you like to
Stay up to date with the latest
INSIGHTS ?